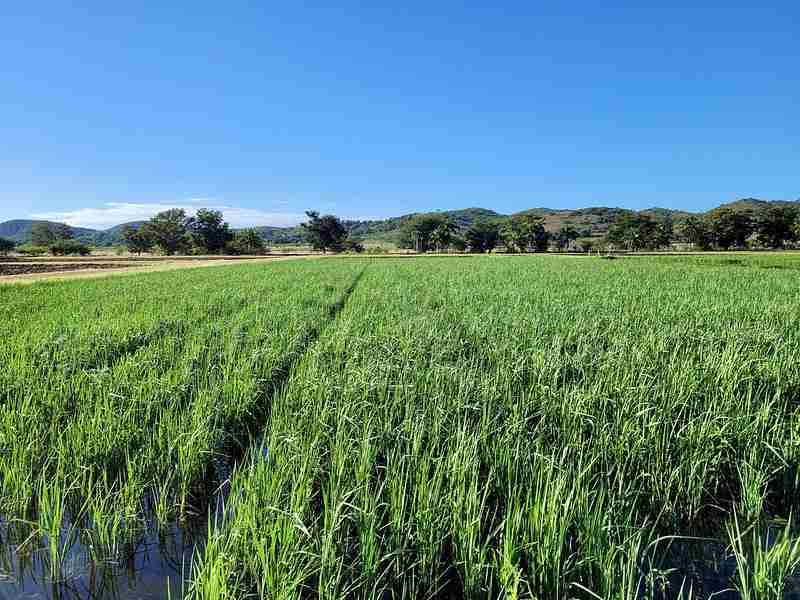 The rice research site at the University of Puerto Rico-Mayaguez Lajas Experimental Station has a long-standing cooperative agreement between public breeding programs in Arkansas and other south-central states. to reduce the number of years needed to breed new rice lines.

Experimental varieties are first grown at the University of Arkansas System Division of Agriculture’s Rice Research and Extension Center in Stuttgart. The seeds of chosen plants are grown in Puerto Rico during the winter. Seed from the off-season harvest in Puerto Rico is then returned to Arkansas in the spring to continue breeding experiments, as well as to produce additional seed from new varieties for sale by the Arkansas Foundation Seed Program.

The Arkansas Agricultural Experiment Station is the research arm of the Division of Agriculture.

Depending on the differences between the parent lines of a given rice plant cross, it takes seven to nine generations with careful selection to achieve the uniformity and stability required for a new variety to be market-ready, a said Xueyan Sha, senior rice breeder for the experimental station. . This process takes eight to ten years if the offspring are grown only in Arkansas. The Puerto Rico nursery allows breeding programs to shorten development time by two to three years.

“Overall we had a really good offseason,” Sha said. “In addition to fewer COVID travel restrictions and social distancing that limited a full crew, there was a near-normal weather pattern in Puerto Rico from November through April and low disease pressure, particularly rice explosion.”

Sha said they have planted and harvested a record 5 acres of seedlings and seed is increasing this off season. About 6,000 pounds of rice seed was sent back for planting this year. The Arkansas Rice Breeding Program typically harvests and reships about 1,000 pounds of seed each year for breeding and testing.

The increase in rice seed this year is mainly due to the production of Breeder Ozark seed, a long-grain variety publicly released in january, Sha said. Seventy bags of Ozark Breeder’s Seed – seed used to grow Foundation or other classes of seed – was shipped from Puerto Rico to the Rice Research and Extension Center in Stuttgart to grow this year.

Sha said they also harvested smudging plots for three potential Provisia® long grain lines at the Puerto Rico nursery, as well as seed purification and propagation plots of three new and improved male sterile lines for hybrid seed production this summer at the Stuttgart site. Sha noted that “purity” means the seed is authentic as described by the breeder with no other off-types or rice variants mixed in.

Arkansas rice researchers have also used the Puerto Rico site to plant many second and third generation progenies of conventional Clearfield.® and Provisia® long-grain and medium-grain test varieties for the advancement of generations, Sha added. Provisia® and Clearfield® are proprietary herbicide resistant technologies.

New lines of rice are needed to further increase grain and miller yields, which improves production and the farmer’s bottom line, Sha said. New varieties are also bred to improve resistance to existing and emerging diseases and other stresses like higher daytime and nighttime temperatures.