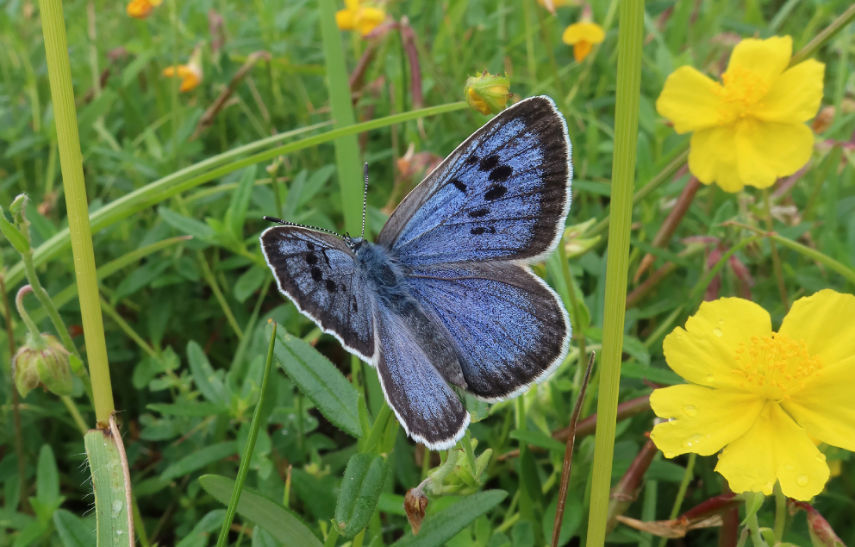 Big blue butterflies breeding at the highest level for 150 years

Reintroduced to the UK in 1983, the greater blue butterfly has flown in highest numbers since records began at the highest number of sites in 2022.

Thanks to meticulous conservation management by a partnership of scientists and conservation organisations, the South West of England is now home to the largest known concentration of big blues in the world.

The big blue has a bizarre life cycle.

Having fed for three weeks on the flowers of wild thyme or marjoram, the caterpillar produces scents and songs that make fire ants believe that it is one of their own larvae, and is carried underground in the ant nest and placed with the brood. The caterpillar spends the next 10 months feeding on ant larvae before pupating in the nest the following year, then emerging to crawl above the ground as a butterfly.

Despite more than 50 years of efforts to halt its decline, the big blue was declared extinct in Britain in 1979.

Its reintroduction in 1983 was based on the discovery that large blue caterpillars can only survive in the nest of a particular species of red ant, Myrmica sabuleti. Changes in campaign management were responsible for the extinction. Grazing changes left the surviving wildflower meadows too tall and shady for the heat-loving fire ant. These trends have now been reversed through targeted grazing – tailored to optimize turf structure at each interconnected site – in two UK landscapes to date.

As knowledge grew, it was possible to create a new big blue habitat “from scratch” on arable land, failed plantations and new railway constructions – the ultimate test for what is already the program largest and oldest successful conservation for any endangered insect. in the world.

A total of 12 new sites are being restored to flower-rich meadows suitable for raising big blues, either ‘from scratch’ on arable land, conifer plantations and failing railway constructions, or by restoring pastures tailor-made in degraded lands. Already these support up to a third of Britain’s great blues population, up from just 7% in 2019.

These restorations of an endangered wild grassland type have also provided ideal breeding grounds for many other rarities that share the habitat of the big blue. Among the plants, the extremely rare pasqueflower and the cut-leaved self-healing reappeared and/or spread under the “great blue management”, with up to 12 species of orchids.

A remarkable number of insects grew on, or newly colonized, the 12 restorations. Nationally threatened species include the strident carder bee (the second most endangered bumblebee in the UK), the rose bush beetle (known from only five UK sites), the lowland villa ox (no recorded in the UK for 50 years before 2000), and the odd, robust beetle (only found at around 30 UK sites). Eight butterflies listed in the red data – Duke of Burgundy, Little Blue, Adonis Blue, Brown Hairstreak, White-letter Hairstreak, Little Heather, Grizzled Skipper, Dull Skipper – also thrive alongside abundances of insects and more common or local plants.

These restorations represent the biggest and most innovative next phase in Britain’s big blue recovery. Apart from the gains of other rare species, they are important internationally as the big blue is listed as one of the “most endangered insect species” in Europe, and similarly worldwide.

The 12 sites link or extend more established populations spanning two landscapes in central Somerset and more recently in the Cotswold Hills of Gloucestershire where one of the most promising strongholds is now established.