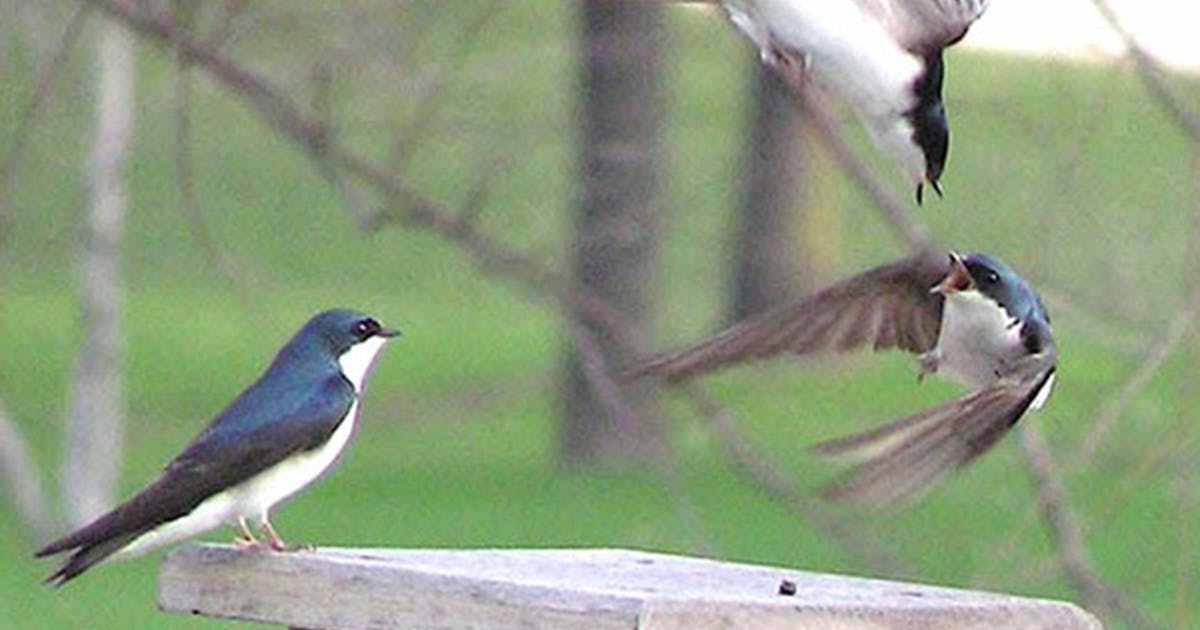 A pair of Tree Swallows that survived the record mid-March blizzard south of us last spring went straight to work when they finally arrived.

They chose one of the birdhouses I maintain at a nearby golf course. There was a courtship. There was coupling. The pair of birds combined their efforts to raise four chicks.

Monogamy – one paired mate – is a fact of life for most bird species. A nest will be more successful if both parents care for the young.

This does not mean that birds never mate outside the pair during a nesting season.

I observed a female swallow atop the nest box while a male swallow, presumably her mate, hovered in the air above her. Another male approached, flew past the box, almost certainly with the female in mind. He was immediately attacked by the resident male, a brief but serious fight.

Members of monogamous couples sometimes seek or agree to polygamous sexual relationships with others of their species.

The intruding swallow may well have had a mate in another box. By breeding with other females, however, the intruder could increase the likelihood that some of its offspring will survive to reproduce.

Females will accept additional pair mating as assurance that their offspring carry the genes of the fittest male(s) available. Physical fitness, in this case of our fighters, perhaps represented by combat success, equates to a better chance of chick survival.

The male defending his mate and his territory wanted his mate’s eggs to carry his genes alone. He had invested heavily in finding this mate, building a nest and, in the weeks to come, feeding the young birds. He wanted maximum return on his investment.

The intruder was looking for a return with a minimum investment.

Human babies can arrive at inconvenient times in inconvenient places. If you can equate the birth of a baby to the laying of an egg, birds have solved those problems. Most songbirds lay their eggs early in the morning, on schedule, with no surprises.

One researcher suggested that females lay their eggs early in the day to free them up for routine daily activities that might otherwise endanger the egg.

Eggs are most vulnerable to damage just before they are laid. If an egg is laid early in the morning, the critical times for egg completion fall at night, when the bird is least likely to be active.

The weight of the egg when the bird is looking for food could be another factor. Tree swallows, for example, tend to lay eggs between 5 and 7 a.m., according to research.

This species feeds on the wing. Freed from the weight of the egg, the female swallow is better able to maneuver through the air once the day warms up and the insects become active.

For robins, the research clocked an average egg delivery time of mid-morning. Blackbirds feed on the ground.

“Holding an egg probably has little consequence on foraging efficiency (on the ground),” the researchers wrote.

Egg production at a certain time of day could also be helpful to the male swallows I have observed. In most songbirds, eggs are fertilized at 24-hour intervals. An egg is laid and within an hour the next egg in sequence is fertilized.

This time is therefore the best time for males to attempt fertilization.

Male swallows using my boxes flew out to meet perceived rivals whenever necessary. And, given the chance, they might well have been rivals themselves.

The females quietly stayed put, letting the physical condition inherited from competing males determine the fate of their genes.

Lifetime birder Jim Williams can be reached at [email protected]