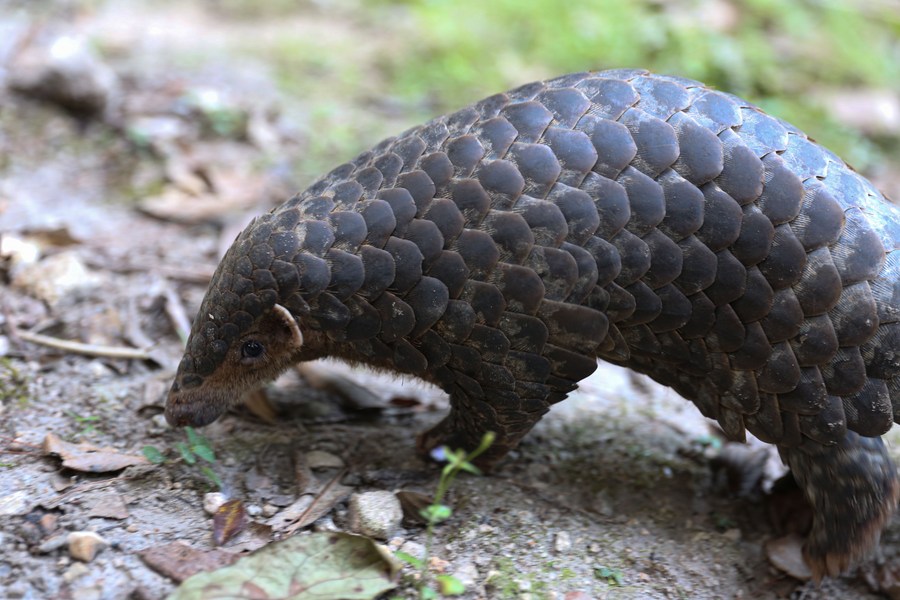 NANNING, May 4 (Xinhua) — A newborn Malayan pangolin cuddles in its mother’s arms, struggling to open its eyes at the Guangxi Forest Research Institute pangolin rescue and breeding base. He is a captive bred third generation filial pangolin and the sixth born at the base.

Chinese scientists have tackled the difficulties of breeding critically endangered Malayan pangolins in captivity up to the third filial generation. The study results were published in the journal Communications Biology in October.

Yan Dingyu, an associate researcher at the Guangxi Forest Research Institute, and his team have been raising and observing 33 wild Malayan pangolins and 49 captive-born offspring since 2016, and they have recorded the species’ reproductive biological characteristics.

Pangolins are an important species that influence the structure, function and health of forest ecosystems. Due to overhunting and habitat loss, wild pangolin stocks once dropped sharply. Captive breeding has thus become a promising means of protecting the species from extinction.

However, captive breeding cannot provide sufficient food and an adequate environment that can meet the long-term needs of pangolins. There also remains insufficient knowledge about sexual maturity, estrus, the sexual cycle and pregnancy of pangolins.

In 2016, Yan’s team had 33 wild pangolins and has since produced 49 captive-born offspring spanning three filial generations. These advances provide more complete information for people to understand pangolins and have implications for the conservation of endangered Malayan pangolins and the provision of scientific advice for the management of other pangolin species.

Darren Pietersen, a pangolin expert at the University of Pretoria in South Africa, noted that the study was the first of its kind to his knowledge that was done in a systematic way and reported the breeding success of the third generation subsidiary.

Yan said further research will be conducted to maintain the current breeding population of pangolins in captivity and to reintroduce pangolins into the wild in accordance with IUCN guidelines for reintroductions.

The reintroduction of pangolins includes subjecting them to comprehensive disease screening and genetic diversity analysis, which means more breeding and wildlife rescue professionals are needed.

The Guangxi Forest Research Institute has started construction of a new pangolin center, which will include an imitation natural enclosure, a wild training ground, a physiological laboratory and other facilities to support future research.

China has raised its protection of pangolins to the highest level and intensified the crackdown on harmful actions such as illegal hunting and trade to better protect the species. ■