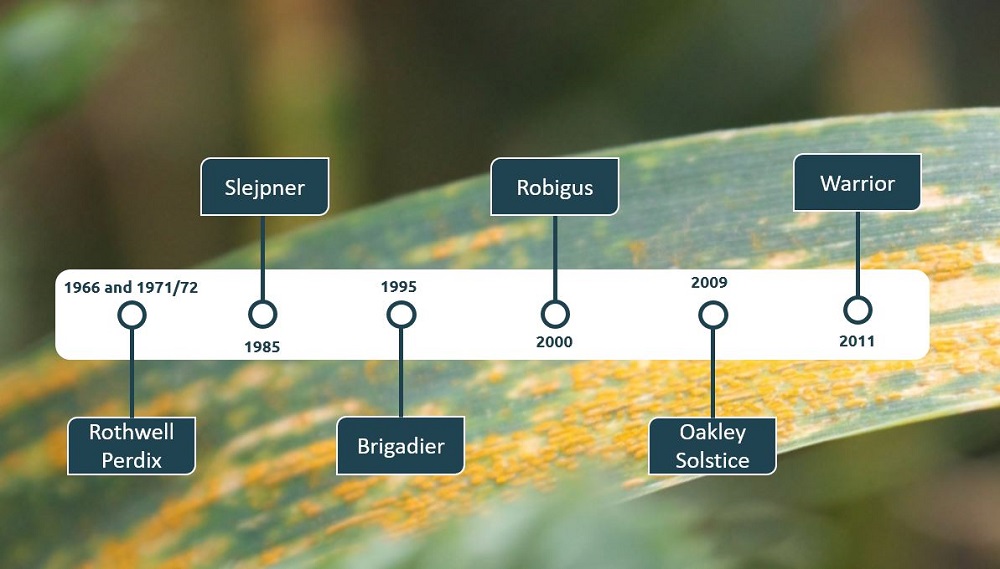 Over the past decade, major changes in the population of stripe rust pathogens in the UK have added complexity to the plant breeding puzzle. Jason Pole, who leads AHDB’s crop disease communications, describes key points from a recent presentation on the subject.

Rachel’s presentation focused on the challenges of breeding for stripe rust resistance.

Over the past 50 years, major breaks in stripe rust resistance have occurred quite frequently (Figure 1) – in cycles of approximately 5 to 10 years.

When new pathogen variants arrive, they can spread quickly (in just a few seasons).

In 2011, the presence of the Warrior Yellow Rust breed in the UK was confirmed. Compared to previous changes, Warrior was very unusual for several reasons, including:

In fact, Rachel said that after Warrior, “stripe rust was like a new disease.”

One of the main reasons Warrior affected so many strains is because it knocked out a single major adult plant resistance gene – YRClaire – which had been widely used in plant breeding since 1997.

The post-Warrior explosion in stripe rust population diversity was so great that it demanded a change in how new variants were named. Today, new breeds are assigned to a genetic color group and given a sequential number – unique to the varieties on which they cause disease (pathotype).

Since Warrior’s incursion, the red group of isolates has dominated the population – with over 50 pathotypes.

The frequencies of these pathotypes vary in time and space: even over a short distance in a field, the pathotypes present can vary considerably.

The three most dominant pathotypes represent around a third of the population, according to the latest UKCPVS results.

Post-Warrior, the stripe rust population has changed so much that its ability to unlock resistance in some older varieties (from the 1990s) may have been overlooked. This includes Brigadier (Figure 1), which features genes known to counter the warrior race population. Thus, historical genetics can offer solutions for tomorrow’s varieties.

The challenges of plant breeding

A major challenge for plant breeding is that a traditional wheat breeding cycle takes about 10 years. Despite the early promise of pre-breeding trials and national listings, varieties may no longer be resistant (or may be less resistant) by the time they reach LR trials.

However, information on UKCPVS pathotypes (presence and frequency) guides plant breeding efforts. The provision of representative pathotypes to plant breeders – for the artificial infection (inoculation) of varieties in disease nurseries – also helps to maximize the chances of successful plant breeding.

Disease nurseries are also used to assess resistance (R) gene combinations. There are at least eight R genes in the current set of RL winter wheat varieties. Wheat breeders seek to incorporate (stack) as many effective R genes as possible to provide long-lasting disease resistance – provided any major yield penalty can be avoided.

Most RL winter wheat varieties have two or three stripe rust R genes, and three have four. However, several contain only one R gene, which not only increases the vulnerability of these varieties, but also that of others. Plant breeding companies, such as Limagrain, now aim to avoid deploying single R genes in commercial varieties.

There is a constant desire to introduce new sources of resistance, as the elite wheat gene pool is narrow. Breeders look to wheat’s wild relatives, direct ancestors and landraces to help develop it. However, this route takes up to three times longer than elite crossovers due to the need to remove unwanted traits.

Genetic technologies, such as marker-assisted breeding, help speed up the plant breeding process. Despite changes in the stripe rust population, many RL varieties have strong resistance to the disease at the adult plant and seedling stages. It shows the ingenuity of plant breeders.

Aimed at plant breeders, agronomists and technical agronomists, the annual UKCPVS stakeholder event showcases the latest results from the project. The 2022 event featured several presentations and related information on what the latest developments mean for field control this year.