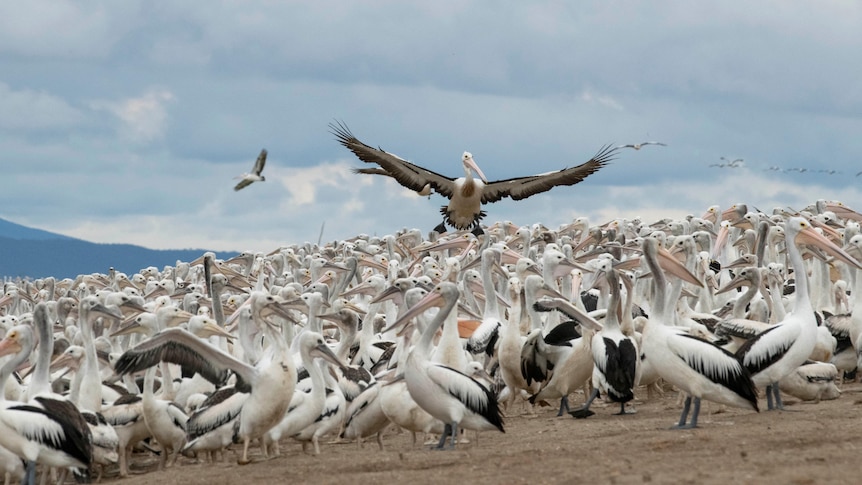 Heavy rains on Australia’s east coast are invigorating wetland bird species, but conservationists have warned the next drought is imminent.

Mal Carnegie of the Lake Cowal Foundation said unprecedented rainfall has been recorded in the Lachlan River catchment in west central New South Wales so far this year.

“The Lachlan River system has been flooded for quite a long time, far more than we’ve seen in the last 30 to 40 years,” Carnegie said.

He noted that the weather had translated into mass breeding events for native species like pelicans and the straw-necked ibis.

“In Lake Cowal we had about 150 hectares of breeding straw-necked ibises; we still don’t have a hard number on that, but it’s somewhere between 50 and 100,000 birds.”

With optimal conditions observed throughout the river system, government agencies are preparing for the next drought.

“We know there is going to be another dry spell ahead. There is only one missed rain event left,” said Michelle Grout, Commonwealth Waters Officer.

“We need to prepare for this and deliver water wherever we can and to the assets we really care about, making them thrive and building their resilience.”

It’s a sentiment echoed by Richard Kingsford of the University of New South Wales, who says better water management is key to ensuring water security.

“We are now in a period of flooding, so to some extent the pressure has gone down because there is a lot of water around,” he said.

“One thing is certain; like death and taxes, we are going to have another drought and it will be difficult.”

The Lachlan River is a heavily regulated system, with dams, weirs, and locks controlling the flow of water throughout the region.

Dr Kingsford says that despite the ideal conditions seen in the mid-west, the regulation of the river is destroying it.

“We’ve had these amazing responses from fish and pelican colonies on Lake Brewster, ibis colonies on the Booligal system, but they’re not as big as they used to be,” he said.

“He’ll never go back to where he was, nor should we think we can go back.”

Wiradjuri elder Ray Woods said current infrastructure along the river, such as the Wyangala dam, was allowing too much water to be removed from the system.

“Our old saying is that Mother Nature gives us everything, we don’t have to take her all the time,” he said.

Mr Woods says stakeholders involved in the management of Lachlan should not repeat past mistakes after the opportunity presented by the weather.

“We understand that there is agriculture and the infrastructure has already been put in place,” he said.

“Let’s learn from the mistakes that have been made and work with what we have.”

Jamie Pittock, a professor at the Australian National University, called for increased investment in the Lachlan River to support wetlands that were vital to native birds.

“The Lachlan is the forgotten river,” he said.

“It’s not considered part of the northern basin that got hundreds of millions of dollars with things like the northern toolkit to improve river management.

“It’s not a part of the southern basin that has about a billion dollars with things like the sustainable diversion limit adjustment mechanism program.”

Local news straight to your inbox

ABC Western Plains will deliver a roundup of the week’s news, stories and photos every Friday. register here