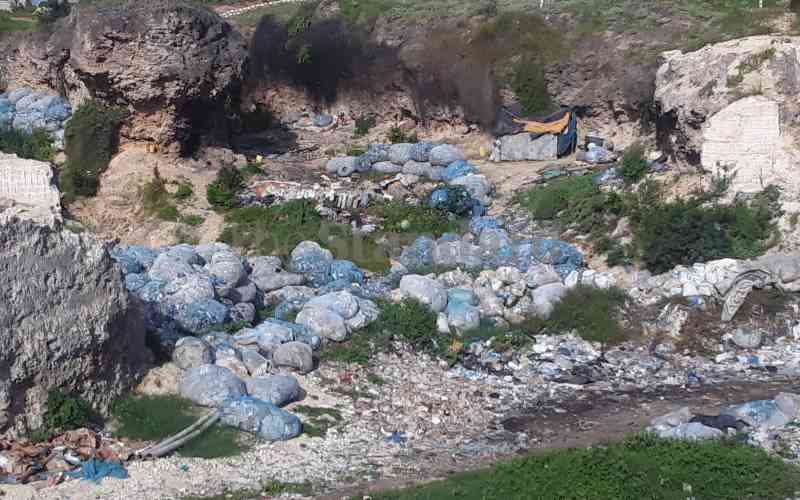 Wasini Island, a secluded tourist gem, is also home to over 250 species of fish and a breeding ground for turtles. But this biodiverse natural habitat continues to face catastrophic destruction due to heavy plastic waste in the mangrove forest.

Huge plastic waste that washes up on the island ends up in the Mkunguni mangrove forest, killing fish and turtles in droves.

Fish and turtles also began to migrate in search of cleaner and safer breeding grounds.

As a result, more than 200 fishermen and 3,000 households who solely depend on tourism and fishing for a living on the island which lies on the outskirts of Kwale County are at risk.

When The standard The team visited the island last week, they witnessed a massive plastic spill, which also became an eye sore on the shores of Mkunguni beach, the back of the island which is considered one of the most popular breeding grounds for fish and turtles.

A visit deeper into the mangrove forest exposed us to more piles of used water bottles, and those of motor oils, lotions, yogurts or sodas. Slippers and polythene bags added to the lousy mix.

Local fishermen blame neighbors in Zanzibar, Tanzania, Seychelles and Comoros, and also cite ships as a source of plastic spillage. However, there is no recorded data or evidence to support the claims.

Mkandi Vuyaa, a fisherman from Wasini Island, says: “I found several fish with plastic inside. I found a huge fish that was dead and washed ashore by the waves. There was plastic inside,” says Vuyaa.

He says that with the plastic threat, the number of fish they were catching per trip dropped dramatically, from 50kg in 1989 to 3kg. Sometimes they come home empty-handed. “Plastic waste is a big problem for us because a lot of fish are dying. And now the fish no longer come to the mangroves to breed because plastic waste has taken up space in their habitat,” says Vuyaa, 58.

He remembers how, as a child, they would struggle to bring their catch home. “The quantity of fish has decreased considerably. When I went fishing with my dad in the early 90s, we would catch and fill three huge baskets and have to give up fish because we couldn’t carry it all at once,” says Vuyaa.

Between January and March 2021, at least 80 young turtles were reported dead in Marereni County Kilifi by Dr. Thomas Kalama Mkare, a researcher at the Kenya Maritime Fisheries and Research Institute (KMFRI).

Dr Kalama cited plastics and the dumping of poorly treated waste from nearby salt factories as some of the causes of the deaths. Trawling and poaching were the other causes.

Wasini Beach Management Unit (BMU) Chairman Noordin Musa said the island was the “headquarters” for the dumping of plastic waste. He says that every season sees huge plastic deposits on the sides of the island.

Musa says plastic pollution could rob the island of its rich source of fish and tourists who flock to the area to snorkel and watch dolphins, humpback whales and corals.

He says dolphins, whales and turtles are scared and affected by dirt, while plastics bleach and kill corals. “With plastic, fishing and tourism will decrease, because no tourist will come to the island with this magnitude of plastic waste, and yet they want to see dolphins, corals and other fish,” says Musa.

He agrees with Vuyaa that plastic waste is no longer brought by locals but mainly dumped ashore from different parts of the world, such as Malaysia and Comoros. Musa says that despite efforts to clean up the mangrove forest, the plastic remains uncollected and ends up in the ocean.

In the past two weeks, he says, they have transported four boats full of plastic waste to the mainland. But even that was not collected at Shimoni Fisheries. “They (plastic waste) stay uncollected for days and end up in the ocean. Children wash them and sell them to juice vendors,” Musa explains.

He wants a company to buy the plastics or have a landfill available to dispose of them to help solve part of the problem. “The problem is that our cleanup efforts won’t reduce the plastics as they go back into the ocean,” Musa says.

He called for a good strategy to ensure that plastic waste does not end up in the ocean.

Musa says that despite laws in place regulating waste management, plastic manufacturers are not involved in the collection of plastic waste. “Their goal is to sell their products. They are not in the new fight against the plastic menace,” says Musa. Asma Awadh, World Wildlife Fund (WWF) Coastal Programs Officer in Kenya, says most fish in the sea mistake plastics for food. Turtles like Taffy, for example, mistake green colored plastics for grass and eat them.

She says most of the plastic eaten by fish goes into the digestive system and some slightly broken down pieces are eaten by humans.

“When we buy fish, we have to clean it well because it is contaminated with plastics. The danger of consuming fish that has swallowed plastic is that it is carcinogenic and one can end up developing complications,” says Awadh.

She says the turtles are already an endangered species although they play an important role in stabilizing the ecosystem. “Turtles have a double tragedy as they are poached for food in some cultures and some drown from disease, nets and plastics. Green turtles feed on sea moles and algae, cleaning up the sea ​​and making it better for the fish. They clean up the environment and stabilize the ecosystem,” says Awadh.

She says WWF is implementing the Plastic Circular Economy Program created in 2018 to build a future where plastic is valued and managed in a way that serves human and environmental well-being. This is also to ensure that no leaking plastic spills into the wild.

And with the new law on sustainable waste management, Awadh says all open landfills will be closed within two years to reduce visual pollution and prevent waste from returning to the environment. “The law will provide a guideline on the formation of technical landfills, which are professional ways of managing waste. The landfill will handle general waste, but each county must have a material recovery facility where plastics will be managed,” says Awadh.

She says that according to KMFRI, as much as Kenya contributes to the dumping of plastic waste, most plastics are washed to shore by waves from other countries.

She acknowledges, however, that there is no documentation and clear data on vessels caught dumping plastic at sea and that the coastguard monitors vessels entering different territorial spaces. “We now have a global plastics management treaty and WWF has been able to work with our counterparts to pressure different countries to at least address the issue,” says Awadh.

She says WWF has partnered with Mombasa County through the Plastic Smart Cities program for three years to eliminate the use of plastic.

Thanks to the circular economy, several waste collectors have benefited from WWF training on waste sorting, safety and finding a reliable market for waste to help them earn while cleaning up the environment.

Awadh also says that sorting rubbish at source will go a long way in managing household dumping and that the 20,000 shillings penalty put in place will help enforce the laws. “We have a solid waste management bill, but it’s up to Kenyans to want a clean environment,” says Awadh.

She says that with the extended producer responsibility (EPR) or return to producer program, plastic manufacturers will track the last mile of those produced.

WWF is also working with the Kenya Manufacturers Association and other stakeholders through the EPR to encourage consumers to collect plastic bottles.