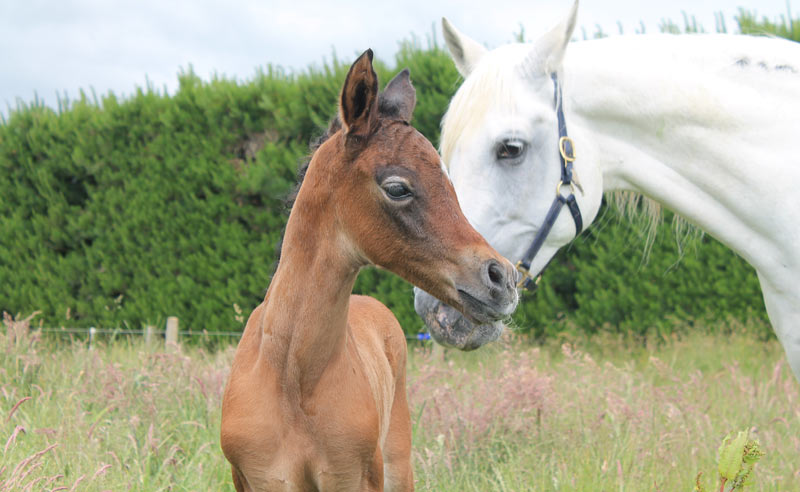 The invasive nature of equine herpesvirus 2 and 5 infections was laid bare in a study of mares and foals on three farms.

Researchers Karol Stasiak, Magdalena Dunowska and Jerzy Rola noted that EHV-2 and EHV-5 are commonly detected in horses worldwide. However, few studies have looked at the dynamics of these infections over time in a group of horses.

The impact of these infections on the equine industry has been difficult to establish, as both viruses have been identified in samples from clinically normal horses, as well as horses with respiratory disease.

The trio, in a communication to the newspaper Virusset out to study the dynamics of EHV-2 and EHV-5 infections in mares and their foals at three breed-specific Polish national stud farms.

A total of 38 healthy mare-foal pairs participated in the study, including Arabian horses, thoroughbreds and Polish Konik horses.

Nasal swabs were collected from each animal monthly for 6-8 months and tested for viral load of EHV-2 and EHV-5 in each sample.

The researchers found that all 76 horses tested positive for EHV-2 or EHV-5 on at least one sampling occasion. Seventy-three of the horses – or 96% – were infected with both EHV-2 and EHV-5.

In general, mean viral DNA load was higher in samples from foals than mares, but was similar for EHV-2 and EHV-5 on most sampling occasions.

There was, however, considerable variability in viral DNA load between samples taken at different times from the same foal, as well as between samples from different foals. The latter was more apparent for EHV-2 than for EHV-5.

All of the foals were infected with both viruses early in life, by the time they reached five months of age, and remained positive on all or most subsequent swabs, the team reported. study.

The authors, discussing their findings, noted that Polish Konik horses were less likely to lose EHV-2 or EHV-5 than Thoroughbred or Arabian horses.

“The Polish Konik horse is an indigenous primitive breed that exhibits some physical characteristics of the now extinct Tarpan subspecies of equid,” they noted. One could hypothesize that Konik horses can control these infections better than other breeds, possibly due to differences in their genetic background.

“Such a hypothesis should be tested in other experiments. It is also possible that other variables such as management factors or environmental conditions influenced the data.

Based on the results, the researchers said that assessing EHV-2 or EHV-5 infection status in mares (and possibly other adult horses) should not rely on a single sample.

“It remains to be established whether repeated detection of EHV-2/5 represented reactivation of latent virus, persistent infection, or reinfection with different variants of EHV-2/5 that circulated within each population. of horses.”

The latter may be supported by the considerable diversity known to exist in both EHV-2 and EHV-5.

“Molecular analysis of the genomic variants present in each sample would help differentiate these possibilities. Such work is currently underway and will be reported on separately,” they said.

The effect of infections on the horses’ health status was not the focus of the study, but none of the mares and foals had any obvious respiratory illness at the time of sampling.

The authors said the findings add to knowledge of the epidemiology of EHV-2 and EHV-5 in horse farms.

Stasiak and Rola work in the Department of Virology, which is part of the National Veterinary Research Institute in Poland; and Dunowska works at the School of Veterinary Science at Massey University in New Zealand.

The study, published under a Creative Commons Licensecan be read here.