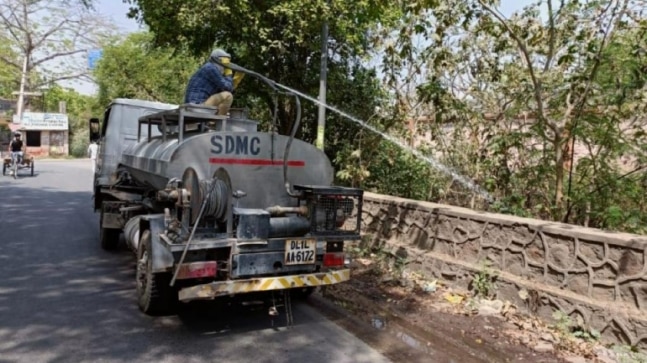 Amid the possibility of an upsurge in vector-borne diseases due to rise in temperature, the South Delhi Municipal Corporation (SDMC) has launched an intensive control campaign against mosquito breeding. The civic body has launched an anti-larval campaign to control the breeding of larvae in sewers, water bodies, swamps and construction sites to control the incidence of malaria and dengue fever in their respective areas .

As part of this initiative, a seven-day anti-larval campaign was launched to contain the spread of malaria and vector-borne diseases. A total of 144 legal notices were also issued against stakeholders including Government of Delhi Irrigation and Flood Control Department, Public Works Department (PWD) and Delhi Jal Board after the detection of mosquito breeding in their premises.

“A total of 144 legal notices (challans) have been issued against stakeholders including Government of Delhi Irrigation and Flood Control Department, PWD, Delhi Jal Board etc. for the reproduction of mosquitoes in their buildings and premises,” the SDMC said in a statement.

Earlier, when all the institutions and construction sites were checked, it was reported that the agencies responsible for desilting/removing hyacinth and floating materials from drains and water bodies had not completed the task hyacinth removal. During the journey, pockets along sewers and water bodies were found to become breeding grounds for culex mosquitoes. It was then decided to intensify the fight against larvae along sewers and bodies of water to destroy the reproduction of culex mosquitoes.

READ ALSO| How to Prevent Mosquito Breeding in Standing Water

“In the southern area, the reproduction was found at Shamshi Pond Qutub Minar maintained by ASI, IGNOU Campus, IIT Delhi Campus, NCERT Campus maintained by CPWD, JNU Campus and GK Pumphouses- 1 and DJB NRIs for which advisories have been issued.” In Najafgarh region, mosquito breeding was found at Dabri Nallah, Roshan Garden drain, three Ghumanhera ponds and Kapashera drain maintained by the irrigation and flood control department. “In the central area, legal notices against AE (Assistant Engineer) PWD and JE (Junior Engineer) DJB have been issued for mosquito condition at Rajghat Nallah and DJB Reservoir,” the statement read. In Najafgarh region, the breeding was found at Dabri Nallah, Roshan Garden drain, three Ghumanhera ponds and Kapashera drain maintained by the irrigation and flood control department for which the agency has been continued. In the central area, legal notices against AE, PWD and JE and DJB were issued recently for mosquito conditions at Rajghat Nallah and DJB Reservoir.

Delhi reported eight new dengue fever cases in the past week, bringing the total to 69 this year. Until April 2 this year, 61 cases of dengue have been recorded in the city.