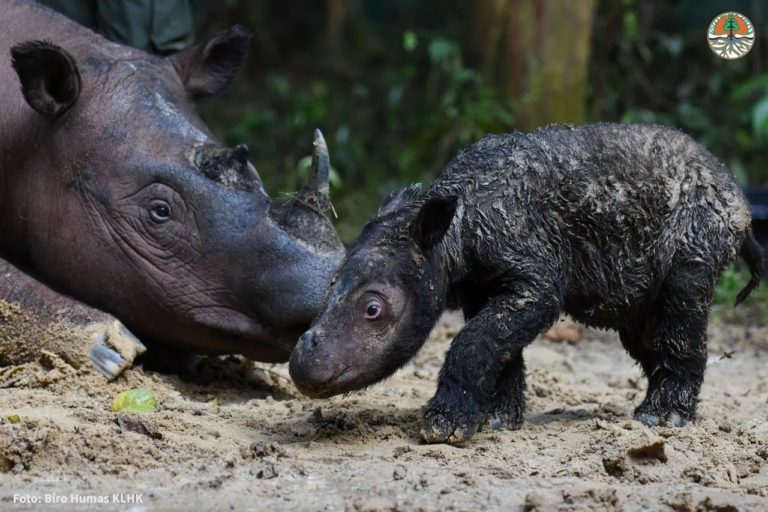 Indonesia has reported the birth of a new Sumatran rhino as part of a captive breeding program aimed at saving the critically endangered species from extinction.

The female rhino was born on March 24 at the Sumatran Rhino Sanctuary in Way Kambas National Park in Sumatra’s Lampung Province, according to a declaration from the Indonesian Ministry of Environment. The calf is the offspring of Andatu, a male born at the sanctuary in 2012, and Rosa, a female captured from the wild in 2005. The ministry has not yet announced the name of the newborn.

The newborn calf is the third Sumatran rhinoceros (Dicerorhinus sumatrensis) born at Way Kambas Sanctuary, and the sixth born since intensive efforts to breed the species began in the 1980s.

“The birth of this Sumatran rhino is exciting news amid the efforts of the Indonesian government and its partners to increase the Sumatran rhino population,” said Wiratno, director general of conservation at the ministry, in a press release. . published March 28.

Indonesia is the last refuge of the Sumatran rhinoceros. Eight captive individuals, including the newborn, live in Way Kambas National Park, and a lone female is kept at Kelian Sanctuary in Indonesian Borneo. The wild population is estimated at no more than 80 individuals living in small, fragmented habitats in Sumatra and Borneo.

Rhino experts around the world decided in 2017 that captive breeding of Sumatran, Sumatran and Borneo rhinos was the only viable option to save the species, which is now only found in Indonesia after the Malaysia’s last captive rhino died in 2019. The species once ranged across South and Southeast Asia, from the Himalayas to Bhutan and India, southern China and the Malay Peninsula . But it has been devastated by a range of factors, from poaching to habitat loss and, more recently, insufficient births.

The initiative launched in 2017 mirrors a similar effort in the 1980s to capture Sumatran rhinos for breeding. That program, however, collapsed a decade later after more than half the animals died without a calf being born. But a series of successful captive births in the United States and Indonesia, and a growing consensus that the species will disappear without intervention, have laid the groundwork for the latest captive breeding effort.

The mother of the newborn calf, Rosa, was captured in 2005 from the forests of Bukit Barisan Selatan National Park in Sumatra and brought to the sanctuary for the captive breeding initiative.

The calf’s father, Andatu, was the first rhino born and bred in captivity in Asia since 1889, when a Sumatran rhino gave birth at the Indian Zoo in Calcutta. Andatu was born to two captive rhinos: a female named Ratu and a male named Andalas, who in turn was born in captivity at the Cincinnati Zoo in the United States.

The sanctuary is also home to Delilah, a female rhino born in captivity in 2016 to Ratu and Andalas – meaning Andalas is the father or grandfather of all calves born at the Way Kambas Sanctuary. Harapan, the other male rhino at the facility, is Andalas’ brother.

A low rate of natural reproduction among isolated female rhinos is often cited by experts as the cause of reproductive problems. Before this new birth, Rosa had eight miscarriages between 2017 and 2020.

“With the birth of Rosa’s rhino calf at Way Kambas Sumatran Rhino Sanctuary, we hope this gives us new hope that we will continue to hear good news about more Sumatran rhino calves in the future.” , said Wiratno.

FEEDBACK: Use this form to send a message to the author of this message. If you want to post a public comment, you can do so at the bottom of the page.