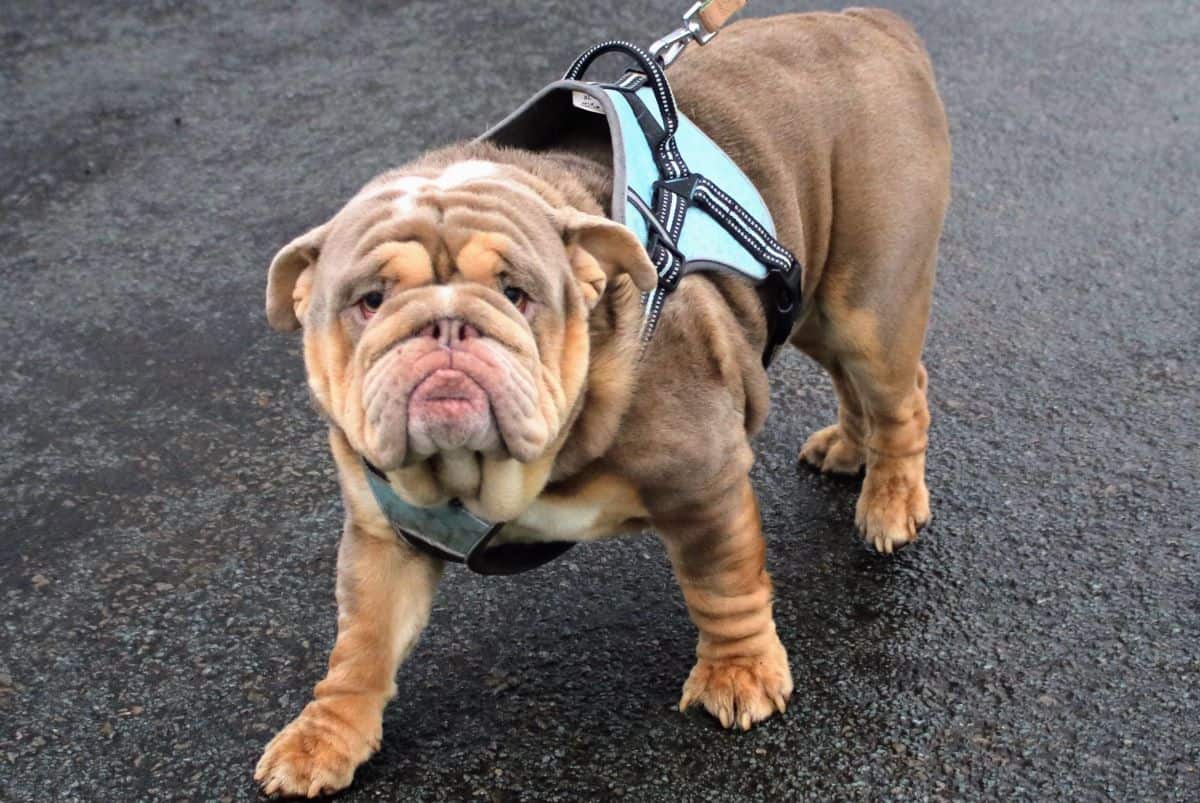 A young bulldog faces lengthy specialist treatment and possible surgery to improve his quality of life due to excessive wrinkles caused by extreme breeding.

Sixteen-month-old British bulldog Rubble was cared for by RSPCA Cumbria West branch in February when his owner could no longer care for him.

The branch’s Ally Chester said: ‘When Rubble came to us he was suffering from skin issues, possible allergies and being overweight.

“Several veterinarians have repeatedly told us that, unfortunately, Rubble is a very poor example of his breed. He has too many wrinkles and bulges that have caused nasty skin infections.

Rubble needs medicated baths three times a week and takes antibiotics for her skin condition. His excessive skin rolling has also caused bilateral entropion – a condition in which the eyelid rolls inward and rubs the eye – for which he requires daily eye drops and lubricant. He will need surgery to correct his eyes and prevent further pain from the disease.

RSPCA canine welfare expert Dr Samantha Gaines said: “Unfortunately entropion and skin conditions are just two problems we can see all too often in brachycephalic breeds – also known as flat-faced breeds – which were bred to have extreme features in order to make them more appealing to buyers.

“But this, in turn, has led to generations of dogs who struggle to breathe, who suffer constant pain and discomfort due to bad skin and painful eye problems, and many of whom suffer from severe allergies.”

Rubble also suffers from allergies and tests revealed that he is allergic to grass pollen, which causes his eyes to turn red and puffy. Staff hope the entropion surgery and possible excessive removal of skin around her face can ease some of the discomfort when her allergies flare up.

Ally added: “When Rubble sleeps on his stomach, the wrinkles around his muzzle almost completely cover his nose.

“We are awaiting a formal diagnosis but he has trouble sleeping and his breathing is terrible; he is really tired, panting excessively, his nostrils are tiny and he overheats quickly. It’s a wreck. It’s so sad to see.

“Our vet thinks he might need surgery for brachycephalic airway obstruction syndrome, a group of conditions that affect his breathing and quality of life. He is currently losing weight, so a Once he’s reached a healthy weight, we’ll be looking at possible surgery for his airway and a possible facelift to remove excess skin.

Rubble is now looking for a new home with owners who understand his health issues and can commit to any surgery or future support he may need to help him have a good quality of life. . Ideally, he is looking for a home without other animals, but he could live with another dog and with older children.

Ally added: “All potential adopters will need to commit to potentially managing their allergies and skin issues for the rest of their life. Taking on any dog ​​is a huge responsibility, but brachycephalic dogs can be a financial commitment. seriously because of the veterinary costs they may incur.

This treatment can be expensive and is often not covered by insurers. The RSPCA has launched a new Save Our Breath campaign urging the public not to buy breeds that cannot live normal lives due to the irresponsible way in which they have been selectively bred.

With demand for pets rising during the lockdown, there are fears that more brachycephalic dogs, cats and rabbits have been bred by breeders, leading to even sicker animals that require expensive vet treatments to help them perform the simplest daily tasks such as walking and playing.

And the RSPCA fears more of these animals could be abandoned or given away to charity as their owners struggle to cope with expensive vet bills as the cost of living soars.

RSPCA Chief Veterinarian Caroline Allen said: “Our desire for cuteness and the selection of shorter, flatter faces – known as brachycephaly – have resulted in dogs struggling to breathe.

“Their excess soft tissue causes their airways to become blocked and their abnormally narrowed nostrils and trachea leave them gasping for breath. Struggling to breathe, or even to sleep, is very distressing and affected dogs suffer from it every day, which which has a serious impact on their well-being, they also face eye problems, skin problems due to excessive wrinkles and painful back problems due to corkscrew tails.

“We understand why there is so much love for these breeds. But it is wrong that we knowingly select traits that compromise their basic health and well-being.

The public has an important role to play in helping improve the future health of these breeds. We need to stop seeing these pets as cute and recognize the serious health issues they face.

The Save Our Breath campaign aims to educate the public about the impact of this type of breeding on dog welfare. The RSPCA would like people to consider getting an alternative breed or consider a cross that has a lower risk of problems.

Find out more about Rubble on Find A Pet or contact the RSPCA Cumbria West team on [email protected] or 07999 606281.

RSPCA Cumbria West is a separately registered branch of the RSPCA and responsible for its own fundraising; to support his work make a donation via JustGiving.